Danae Miller, left, and Ila Lane are back in the Thunderdome this season.

Women’s Basketball is Back in Action

“Ila Vista” is one of the themes of UC Santa Barbara women’s basketball in 2021-22. Ila Lane, a dominating 6’4” post player as a freshman in 2020, has returned to the court after sitting out last season over COVID concerns. She will be joined by a mix of veterans and newcomers that constitutes the deepest and most versatile roster in Bonnie Henrickson’s seven years as head coach.

MAKING HISTORY: Lane was named to the Associated Press All-America Honorable Mention team after her rookie season in which she led the nation in rebounds, averaging 13 per game and 15.3 points. The Gaucho women’s previous AP All-Americans – Erin Buescher (1999, 2000), Lindsay Taylor ’04 (2003) and Kristen Mann ’12 (2004, 2005) – all went on to be WNBA draftees. “I was very set on coming back,” says Lane, who returned to campus last spring. “Coach Bonnie always says it’s a four-year decision. I really believe in that. I love it here, I love the team, and I’m ready to have an amazing year.”

MILLER TIME: Danae Miller jumped at the chance to be UC Santa Barbara’s starting point guard for a fifth season after the NCAA granted an extra year of eligibility. “Last year was quite a weird year, and I didn’t want to leave my college career on that note,” says the 5’7” super senior, who will complete her degree work in psychology and brain science this spring. “I wanted to have a more real college experience and come back to a team with all the players we have.” 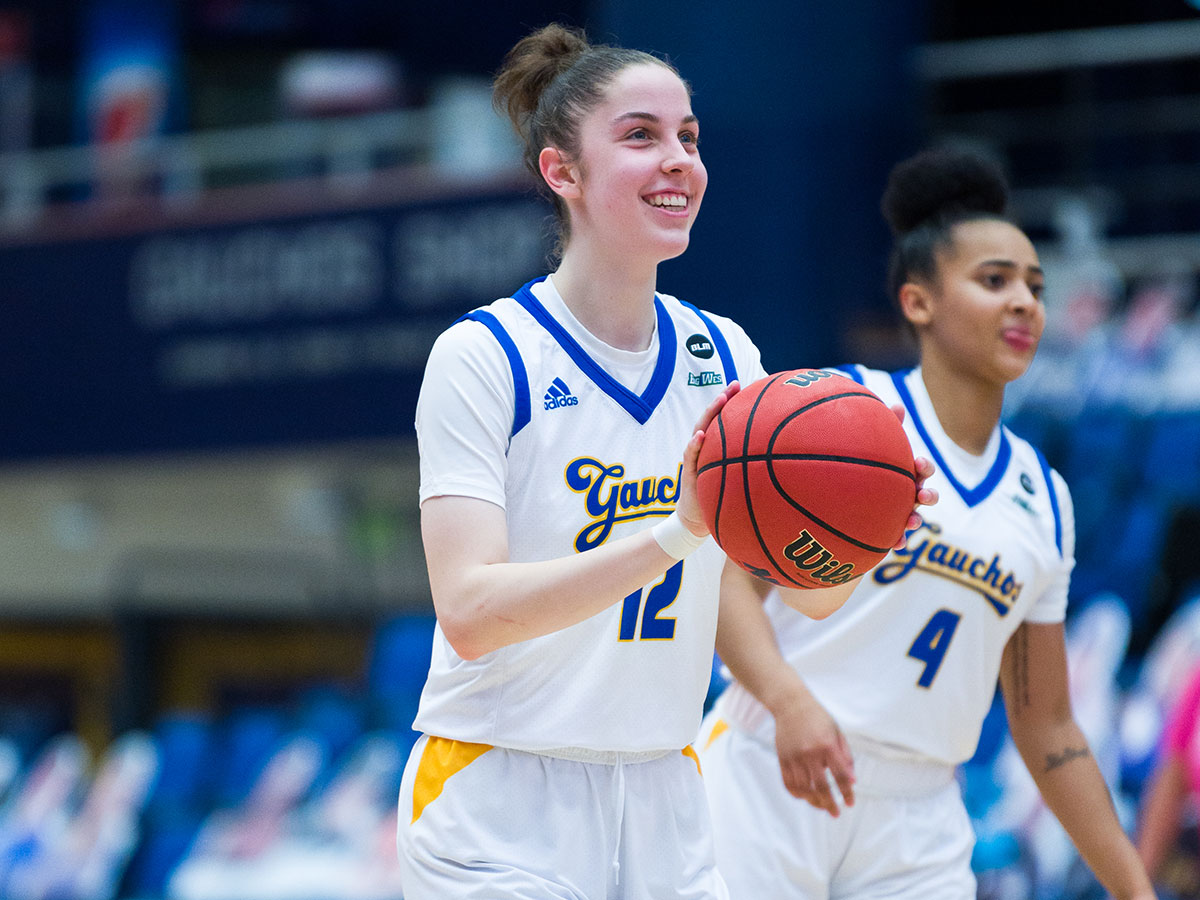 UNFINISHED BUSINESS: The 2019-20 regular season finale was a thriller at the University of Hawaiʻi at Mānoa, as Miller’s baseline jumper with 0.2 seconds remaining lifted the Gauchos to a 57-56 victory over the Rainbow Wahine and a promising No. 2 seed in the Big West Tournament. But before they could launch their bid for the NCAA’s “Big Dance,” the postseason was cancelled by the pandemic, and UC Santa Barbara was never at full strength last season because of Lane’s absence and injuries. “We definitely want to pick up where we left off,” Miller says.

REINFORCEMENTS: Two transfers have joined the Gaucho fold, 5’11” junior guard Alexis Tucker from Texas Tech and 6’2” junior forward Tatyana Modawar from University of Texas at El Paso. They are joined by Johnni Gonzalez (5’6”), a junior point guard who sat out last year. First-year players trying to make an impact include Callie Cooper, a 5’6” point guard from Richardson, Texas; 5’11” guard Kennedy Johnson, who averaged 18 points and 10 rebounds at Oakland’s Bishop O’Dowd High; and Laurel Rockwood, a solid 6’4” post player from Henderson, Nevada, who has been challenging Lane in practice. “She’s just on me all the time,” Lane says. “I don’t know how to get away from it.”

COACHES OPTIMISM: “I’ve never felt this confident about our team,” Henrickson says. “We have quality and depth. Most of them have been together since the spring and have developed great cohesiveness. The defensive team will make us special.” Henrickson, who came to UC Santa Barbara after 11 years at Kansas, has had Nate Fripp at her side from day one. Other assistant coaches are second year Kaili McLaren, who played on two national championship teams at Connecticut; and Adrian Sanders, a newcomer from Southern University. 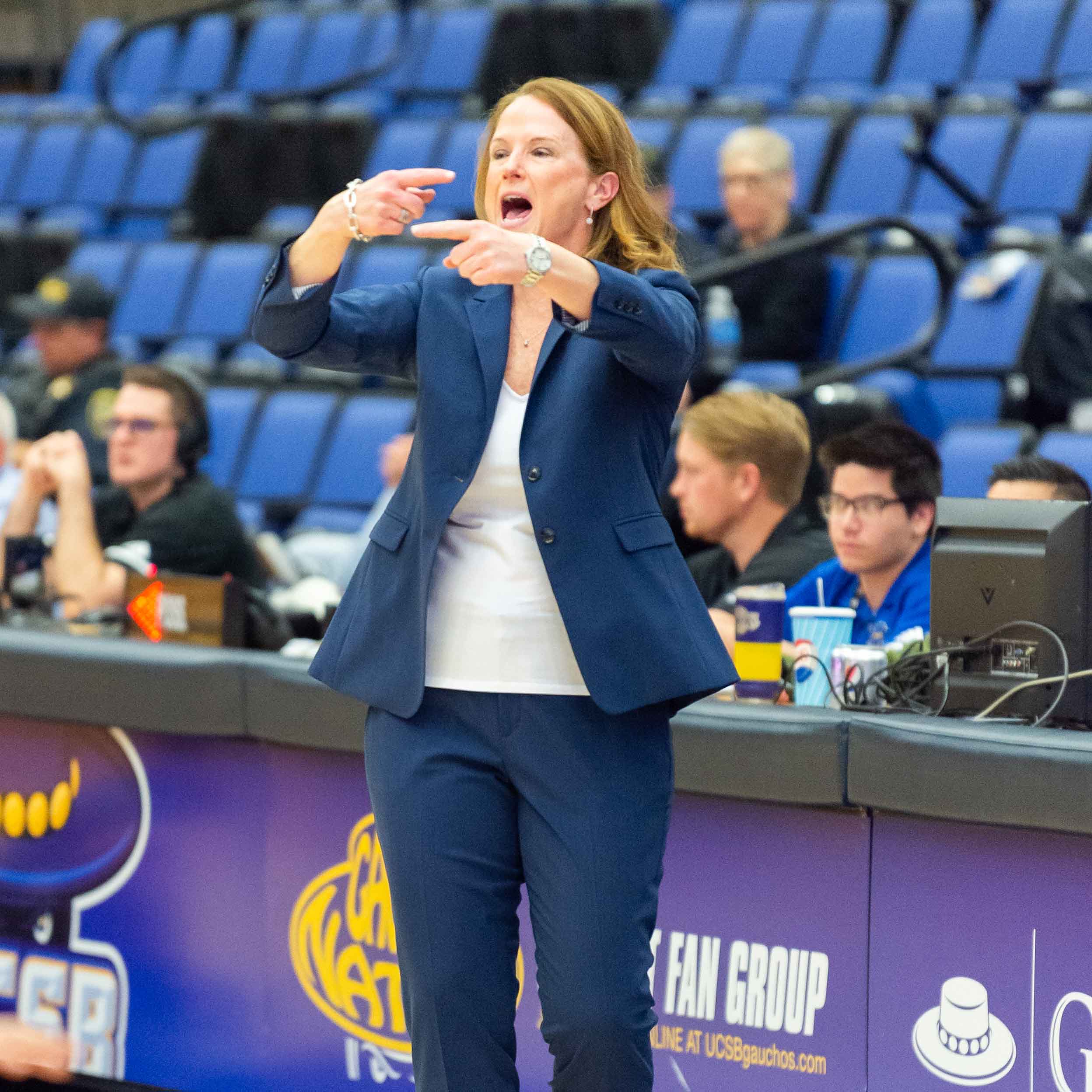 KEY TESTS: After opening the regular season at home with a 61-58 victory over Loyola Marymount, the Gaucho women play at St. Mary’s Thanksgiving tournament in Lane’s hometown of Moraga. Four non-conference home games in December conclude with UC San Diego on the 30th, followed on New Year’s Day by the Big West opener against UC Irvine. Among other conference contests at the Thunderdome are Long Beach State (Jan. 13), Hawai’i (Jan. 27), Cal Poly (Feb. 12) and the two-time defending champion, UC Davis (Feb. 26). UC Santa Barbara will finish the regular season at Hawai’i before the Big West Tournament on March 8-12.

TOURNAMENT HISTORY: The UCSB women’s team hasn’t won the conference tournament since 2012, but there was a time it was known as “the UCSB Invitational.” Under legendary coach Mark French, the Gauchos claimed 12 Big West titles, including nine in a row from 1997-2005. They won seven NCAA tournament games and advanced to the Sweet Sixteen in 2004 against Connecticut, which needed a series of clutch shots by Diana Taurasi to hold off the Gauchos, 63-55.

MARCH MADNESS: It was not until September that the NCAA decided to extend the “March Madness” brand to its women’s basketball tournament as well as the men’s. “That was hard to understand,” Henrickson says. “In this world of marketing, it means a lot.” The NCAA’s double standard was exposed last March when an Oregon player posted a video showing the meager exercise equipment at the site of the women’s tournament. “It was pretty painful,” Miller says. “Of course, we’re just women.” At UC Santa Barbara, Henrickson says, “We’re in good hands. We have the same strength coach as the men. We have full access to the weight room.”

FILLING THE SEATS: There used to be rows of empty seats at women’s games in the Thunderdome. Cori Close ’93, the UCLA head coach who played on the Gauchos’ first NCAA teams in 1992 and 1993, jokingly referred to it as “the Mumbledome.” Then the success of French’s teams made the women’s games a hot ticket and crowds continued to roar until pandemic restrictions emptied the arena last season. Now, with the new chair-back seats in place, Miller is eager to see fans return. “It’s going to be great to have people back in the stands,” she says. “They’re in for a treat.”